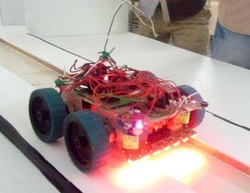 I have done this project on request of one of faculties in order to represent my college. One of my juniors have presented this project in a competition called SHACKLE RACE ROVER   at STEPCONE'13 in GMRIT and my bot stood first. My bot completed the task in 45 seconds.

The main theme of the RACE is to build a completely autonomous robot which is capable of solving an arena which consists of various aspects like line following, obstacle detection, climbing a ramp, moving across terrain filled with stones, and also following a track.

The rover (Autonomous robot) has to accomplish the following mission:
The arena will be in the shape of 5 alphabets ‘GMRIT’. The actual alphabet arrangement and shape will be shown clearly in the arena description which is a 3D view of the arena.

Since I have completed my B.tech, am not supposed to take part in STEPCONE'13. So, I have assisted my juniors to represent my college.I am winner of project expo at STEPCONE'11 my experience had helped them a lot. Even though I din't get a chance to take part in this event, Am happy for one thing that am the one behind the success of this bot. This bot stood as the champion by completing the task in an average time of 45 sec for a lap.
Click here for videos
BACK
Powered by