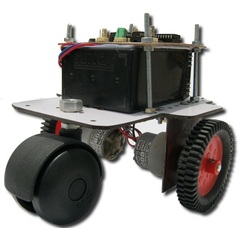 In the beginning of my first year of engineering, I thought of learning robotics. so, I bought a DO-IT-YOURSELF kit from a hobby store and assembled it. While assembling it, I gradually gained profound interest in robotics.

In order to control the movement of the Cellphone operated Land Rover, a phone call needs to be made from the operator’s cell phone to the cell phone mounted on top of the land rover. This rover-mounted phone is responsible for providing the DTMF tone inputs to the MT8870 decoder IC which is a part of the control circuitry. This connection between the rover-mounted phone and the main circuit (PCB) is achieved through a pair of headphones (also commonly known as the “hands-free” kit). Once the call made from the operator’s phone is received at the rover’s end, any key maybe pressed on the operator’s phone to control the actions performed by the land rover.

The DTMF tones produced by each such button-press are received by the rover-mounted phone through the call-connect. These tones are further fed to the control circuit by the headset connected to the rover-mounted cell phone. The MT8870 decodes the received tone and sends the equivalent binary number to the microcontroller’s port A (input port). According to the program burned into the microcontroller, the rover will move in a direction corresponding to this input.

Results:
This DIY kit educated me in the field of robotics. I have learnt that robotics is a branch that requires electronics, computer and mechanical skills. From that day, I took ever opportunity to acquire these skills.

References:
The DIY kit came with a reference manual which helped me a lot.
Back
Powered by